Archive for the tag “walnut”

Last week I asked Dan if he had a recipe for mohnplunder, something I ate more than half a life time ago when I took a trip round some museums in Europe looking for Celtic objects. The ones I ate in Germany were pastries stuffed with poppy seeds. Dan didn’t have a recipe for pastries, but pointed out this recipe which is in Short and Sweet and also published here.

You need about 5 hours to make this sweet yeasted dough epic. So it’s not something to rush into, but can be done in stages with a bit of preparation in between. There’s no picture in Short and Sweet, but there is one on the Guardian website, so at least we know what it should look like.

The dough is made in two stages. First a sponge stage with yeast and flour mixed into milk that has been boiled and cooled, and left to rest for about an hour. Then butter is rubbed into more flour and mixed with the sponge and rested. Meanwhile you make the filling. I’m a bit scared of the filling because it is quite runny, but it tastes quite nice. I don’t think my food mixer can grind the walnuts small enough. The only change I made was to use brandy instead of rum.

Here’s some pictures so you can see what happened. A fair amount of filling spilled from the top down the side. The result wasn’t particularly elegant-looking, but it tastes OK! 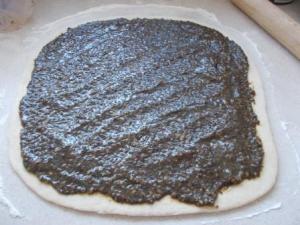 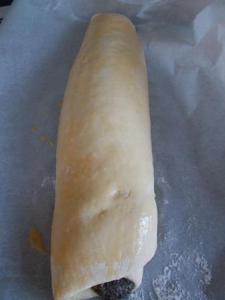 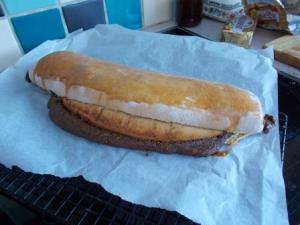