Archive for the tag “oranges”

A busy weekend and as I’d ordered ‘marmalade kits‘ from Riverford Organic for delivery last week, I thought I’d better check out the cupboard and see if there was any of the 2012 vintage left. Just a word about ‘marmalade kits’ – they are just some Seville oranges and lemons in a paper bag with a recipe, not a twee Cath Kidston sort of thing at all. More on marmalade recipes to follow.

There were two jars of 2012 vintage marmalade left, so half of one has gone into a Great British Bake Off Sticky Orange Marmalade Cake. As usual, you’ll have to find the recipe yourselves because I don’t think its available from any reputable source, but it is available online in various places as everyone and their dog seem to be making it just now (move over chocolate crackles), and if you can’t be bothered, it’s just a three egg sponge recipe with a little bit of baking powder and salt, and three nice (that means heaped in my book)tablespoons of marmalade mixed in. When it comes out of the oven, it cools and three more tablespoons of marmalade are warmed and brushed over the top. When that lot has cooled, some water icing is drizzled over the top. Dead easy, very yummy and I’m thinking of some additional flavour enhancers as I type, maybe some crushed caraway seeds or coriander seeds? Anyway, this was plain and here’s a picture – note we managed to eat a lot of this before I remembered to immortalise it! 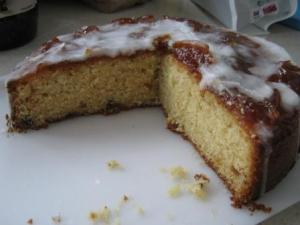 Also on Saturday I made some of Pat Ring’s Chocolate Flapjacks – again – please get a copy of her book. These are very simple and very yummy. Butter, light and dark muscovado sugar, golden syrup, porridge oats and jumbo oats, all stirred up and baked. 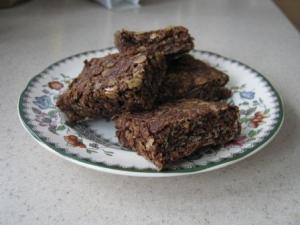 Back to the marmalade production. The recipe I use follows Delia’s for Dark Chunky Marmalade. Poaching the fruit makes it really easy to slice up, and you can do the whole thing in stages over several days. You also don’t waste very much of anything with this recipe,  just the lemon peel and the pips and pith from the insides of the fruit. I don’t have a preserving pan but find this quantity will just fit in my casserole pan. Here’s some pics showing the progress from raw fruit, through boiled to chopped and back in the pan with the sugar. I also don’t bother with heating the sugar first as Delia recommends, life is too short for that. The Riverford recipe seems to start with cutting up the oranges into tiny pieces. That also sounds like too much hard work, it’s very much easier when they fruit is all squishy after poaching and only takes about 10-15 mins for a full batch.

It does take quite a long while to boil up to setting point though, so if you’re thinking of having a go, do make sure you’ve got plenty of time and patience on hand while it boils away, Delia says about 3 hours and I think that’s about right. It’s like being in an orange scented sauna in the kitchen here.

Around 11 pounds of deliciousness – and yes I do use old jars when I’m making for family, you’re not supposed to if its for sale anywhere.

My aging ancestor seems to live on tea and toast with marmalade so most of this batch will be going to him and I’ll make the rest another day. My Great Aunt used to make grapefruit marmalade which was very bitter and I’m ashamed to say we did struggle to get through a jar of that before the next year came round and she presented us with more.

Over the last 3 years the Daily Mail has run stories that say that sales of marmalade are falling. Personally, I would like to believe it is because we’re all busy making our own and not buying over-priced ‘designer’ marmalades or, perish the thought, Golden Shred.  I just loathe those little pots you get in hotels, thin, tasteless stuff, nothing like real marmalade. The Dalemain Marmalade awards usually manage to bring about some positive publicity for marmalade, and good luck to all the entrants this year.

While I’m here I’ll say a few words about Seville. If you’ve never been, do think about going. We went in 2001, just after the 9/11 attacks and had a top time. There’s quite a bit to see, particularly if go during one of the religious festival times, including the festival of San Miguel in September. And you can even buy marmalade from the nuns.