Archive for the tag “oat”

The second of my Paul Hollywood bakes this week is the rye, ale and oat bread from the first programme.

For beginners this might look a bit scary. It’s mainly rye flour, and its got treacle and some ale in it. Rye flour doesn’t have much gluten in it so it is never going to be a bright and bouncy loaf. If you like bread with a bit of heft to it, this is one for you. There’s a lot of different brands of rye available these days. I’m using Bacheldre watermill flour, which is available in some supermarkets.

I’m also using fresh yeast as I do find it more reliable than packet yeast. A quick word on fresh yeast, it is available from all the supermarkets that have instore bakeries, sometimes I get charged 1p for a little bit that’ll last a week, sometimes 10p, and some charge proper money (Morrisons and Sainsbury’s are about 60p for 200g). Don’t be shy if you want to try, just say the magic words “can I have some fresh yeast please” at the bit where you can get your store-bought bread sliced and see what they give you. Other sources of retail may include wholefood shops (not to be confused with healthfood shops which are nothing of the sort) and local bakeries that bake on site, although you’ll be taking custom away from them if you bake a lot of your own bread so buy something while you are there.  Weight-wise, just use twice the weight or volume of fresh yeast to dried yeast, so two teaspoons where one is given or 20g for 10g as in the case of this recipe. And I’ve cut down on the salt, as mentioned previously I think 10g is probably twice what you need.

In the programme I think Paul mentioned making bread with ale or barm is a very old technique, and where we get the word ‘barmy’ – in the sense of mad, crazy and frothy. This loaf doesn’t use leaven with the ale so isn’t really all that old-fashioned.  There’s quite a discussion about barm and the place of malt and hops in making bread in times before commercial yeast became available in Dan Lepard’s The Handmade Loaf. Commercial yeast was created to make bread making more standardised and less prone to natural changes in the starters that bakers used. There’s also  a recipe for barm bread using a barm made from beer or ale, flour and leaven which I’ll have a look at when I’ve got a new batch of leaven established. So, because Paul’s loaf uses commercial yeast it isn’t really a barm, but hopefully it will taste good. I’m using Black Sheep Golden Sheep pale ale today as it was all we had apart from a chocolate porter, which I think I’ve reserved for something else.

For this loaf I did diverge from the recommendation to knead for 5-10 minutes. It was a very wet and sticky mix so I used the Dan Lepard approach of mix, leave for 10 mins, knead very briefly, leave 15 mins, knead briefly, and finally left for 30 mins and kneaded very quickly. My kitchen is baltic today due to the cold weather, being east facing and taking the brunt of the east wind. So I left it for about an hour and a half after that lot. It had risen quite well despite the cold. I made up the beer batter topping, and it was rather a lot so I think if I did it again I’d only make a half quantity. Then it was left to sit for an hour and a half while I did the typing above and pictures below. 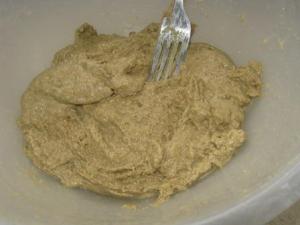 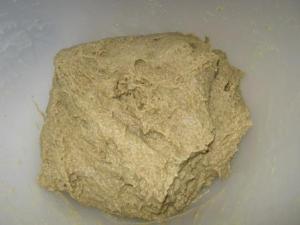 It was then left to prove for a further one and a half hours. And was rising well during that time. I also had to patch up the coating while it was rising as it strted to split a little, so just as well I didn’t throw out the spare coating mix. So how did it turn out? There was certainly some anxious pacing outside the oven as it started baking. 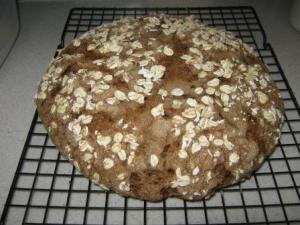 Got a bit of a rise there, the cracks opened up. And now waiting for it to cool down so we can cut it up and have it for tea with some cheese.

[Edit the next day] I don’t think Mr Hollywood got more of a rise out of it than that, it is quite dense but is very tasty. And I’d probably make it again if I were making a buffet lunch with a range of breads on offer.