Archive for the category “puddings”

Very quick blog today to remind me of something I should make more often. From Dan’s book Short and Sweet . It’s also on the web here. I also make about half the recipe as there’s only three of us and we’d be eating it forever if I made more. A full-sized one is good for family gatherings however.

Oat cookies and butter for the base, cream cheese (I use ricotta and marscapone), sour cream, sugar, plain flour, lemon zest, vanilla essence and eggs. Simple and delicious.

OK – can I do the blog about Christmas puds in less than half an hour while I wait for the LakesBakes bread bakes?

Christmas puds are an ‘essential’ part of a British Christmas, but some people don’t like them, actually quite a lot of people don’t like our traditional Christmas foods but that’s their loss. I do like Christmas pud and would eat more of them if they weren’t so calorie and fat endowed. You can read the history of Christmas puds on many websites and the wikipedia one has most of what you really need to know. Recipes also abound and include all sorts of sugars, alcohols, dried fruit etc etc. all the baking names have their own take – Delia, Nigella, Nigel Slater and the BBC Goodfood website has recipes you can browse and find one you like the look of.

But the humble or not so humble Christmas pud means different things to everyone, and something that most people eat only once per year can be invested with associations and memories. When I was younger my great auntie used to make us two, one for Christmas and one for Easter. I don’t know what she put in them but they were always very dark in colour and they set a sort of pudding benchmark in my mind. My mum died when I was in my early 20s, so I have been a ‘provider’ of Christmas ever since and choosing or making the pudding forms a central part of my festive activities.

On balance I prefer not to have to buy a pudding for our Christmas dinner, mostly because I think they are very expensive for what they are, but sometimes you can get a surprisingly good one from an unusual source. As a post-grad student at Lincoln College, Oxford, the kitchens there used to make puds for sale to the students and staff, and very good they were too.  I read recently that the chef, Jim Murden, and butler, Kevin Eglestone, both retired recently, and their successors have a lot to live up to. As a mark of the respect the college held them in they had a portrait painted. How cool!

When I worked at Bournemouth University (or Wally Poly as it was then) the trainee chefs on the catering courses produced puds for sale as well, and they weren’t bad either. Unfortunately the catering courses seem to have gone the way of good things and the courses are all to do with hospitality management these days, not making food for people! So those puds are consigned to memory lane as well.

Caterers, however, sometimes let the side down. I really should know better than to order Christmas pud when work takes us out for festive meals. The drive for profit in the organisations that provide these meals means they tend to select the cheapest, least fruity and toughest puds they can. Little Horwood House – I hope they read this – probably supplied the worst Christmas meal I’ve ever had a couple of years ago and included little carrots that were under-cooked and squirted off onto the floor more often than they made it into anyone’s mouth, and a dreary slab of treacle flavoured goo that was closer in texture and spirit to parkin than it was to Christmas pud. They deserve the *** rating they get on Tripadvisor and probably don’t care what I think about their pud.

It is also possible to get good puds from supermarkets, and the ones I’ve liked best in recent years have come from cheaper supermarkets that sell bargain puds. The reviews of this year’s Aldi offering that beat the Fortnum & Mason version fall into this category and if I hadn’t already made my pud for this year I would try and get one of theirs. Although Waitrose should be ashamed of tarting up their offering with glitter, that’s for kids and cards not food.

Just how British they are struck home a couple of years ago when I was working on a project that involved, amongst others, a chap from Lancashire and a company based near Montpelier in France. As a gift to the French colleague, the chap from Lancashire sent some Christmas puds to France, and I believe they were well received down there, and consumed with gusto by their recipient, although I understand his children didn’t think much of them.

This year I’ve made my pud using a recipe from the Great British Bake-Off Showstoppers book – no treacle involved as I don’t particularly like that. And I’ve had to have two goes at it because the first one drowned itself as it was steaming. Lesson learned – do not try to use a plastic bowl with a clip on lid because it will float and capsize in my largest saucepan, even with a 1lb weight on the top. So I did it again in a ceramic bowl with traditional greaseproof and foil on the top and all was good.

Blackberries mean the start of autumn baking. My father-in-law gave me a few earlier this week. By coincidence I’d bought the latest BBC Good Food magazine which had a cute easy recipe for blackberry bakewells. So voila! The recipe isn’t online yet, but I’m sure it will be soon.

You need some pastry for the bases and then make a cake mixture with butter, caster sugar, ground almonds, egg and a tiny bit of flour. Then the blackberries are added and some toasted almonds to top them off. The recipe said it made 12, but I managed 18 out of mine.

Here’s a pic of the finished article and the image from the magazine of what they should look like. Things I’d change – maybe add a little sugar to the pastry, it’s a bit dull, I just used a Great Bake-off recipe for plain pastry. 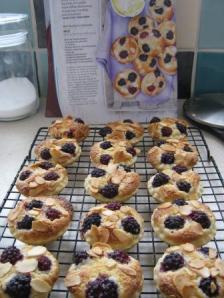 A dinner-time treat to follow down some home-made pizza, the base being Dan’s recipe from Short and Sweet. I like mine thin so make a half quantity for three pizzas and roll them out quite thinly. I also try to use the 00 flour that the recipe calls for. No pictures I’m afraid!

I’d had my eye on this one for a while, partly because it is gluten-free and our niece is that way inclined so if we entertain her we try to include treats she can eat. Normally with cheesecake for her I’d use the GF digestive biscuits from Sainsbury, but this is a way of making a cheesecake without involving any flour. So, equipped with a bottle of amaretto bought this week on offer from that supermarket already named I was ready.

Given that there’s only two adults and our son is mightily suspicious of everything I bake and thinks a wiff of alcohol will make him drunk (one day I’ll remind him about ‘quaffing’ Bucks Fizz at a Christening when he wasn’t out of nappies but not today), I opted to make only a three quarters sized cake on the basis that it ought to do 5 to 7 portions and keep the two of us going over the weekend.

Results – acceptable, a bit on the egg-custard side of cheesecake to be utterly perfect, but as I used the yolk from the egg used for the amaretti biscuits and three whole eggs, that might be why. However, the worst part was that while it was cooling in the oven it leaked out about 50ml of sweet juicy stuff which seemed to contain most of the amaretto. I saved most of this ‘juice’ and used it with some sliced strawberries which I left to marinate in caster sugar while the cake cooled. I don’t expect there to be much of this left by Monday. I have biked about 12 miles today, 7.5 with the offspring on his new road bike, so felt I’d just about earned it. And now I’m equipped with the amaretto, there’s some other recipes in that book that will require my attention.