Had a slightly crappy night/morning/lunchtime so need some dough-based therapy to cheer me up a bit. Only time to try half a batch today, but if a recipes goes well when done in half it will go well when the whole batch is made.

Recipe on the GBBO Good Food website over here.

Nothing particularly interesting in there, but another use for the malt from the malt loaf recipe. I’m using fresh yeast as usual.

Mixing the malt with cold milk from the fridge meant that the malt didn’t dissolve and just sort of twined itself around the fork and looked a bit sulky. I wonder if the milk should be at ambient or warmer? So I swished it about a bit and then poured it all in and stirred it up. I did leave it for a Dan Lepard 10 minute rest before going in and giving it quite a good knead. It is quite a stiff dough, very different to the soft pizza dough I’m also making at the same time for tonight’s dinner.

I don’t think I have a pan that will take 7 litres of boiling water as suggested in the recipe. My biggest pan is……goes off to find out…. about 3 litres. I do have a bigger preserving pan, but I’m not using that. I wonder why we need 7 litres of boiling water when the pretzels are only going in for 5 seconds each? Anyway I think I will be doing them in about 2 litres of water in the big pan, so will be reducing the bicarbonate of soda appropriately.

Ok, shaping them went OK, with a bit of twiddling to get the loops right. Then they went for a quick swim. When I put the first one in the pan it sank, so I left it to rise to the surface, which took 10 seconds. Then the others went in one at a time. After the bath I sprinkled Maldon salt and sesame seeds onto each one before putting the next into the pan. Then all straight into the oven. Time went OK, about 23 minutes all told, and they were hard when I tapped them. Soft and dense on the inside. Not quite sure what good they are to man or beast as they are not rolls or buns but I see on Wikipedia that the Germans fill them with cheese and ham. Is there anything they don’t fill with cheese and ham?

Posted in buns, cakes, cookies and other things and tagged gbbo, great british bake off, pretzels | Leave a comment

Breadmakers, the PM, and basil, tomato and parmesan bread

Our Prime Minister caused a bit of a media political party conference silly-season frenzy a few days back when he was asked if he knew the price of a loaf of supermarket bread, not just any bread, but the budget stuff. Obviously he didn’t and gave a horribly wrong answer and at the same time tried to show himself in a good light by plugging a local flour producer in the Cotswolds and the fact that he could actually manage to load a breadmaker and therefore make his own bread. So 9/10 for the plug for FWP Matthews and 0/10 for having his eye on the ball when it comes to the price of bread that many people have to make do with. The sad thing is that for 47p, which is was apparently the price of supermarket budget bread, those same people could make themselves a decent loaf of bread with supermarket white bread flour, and that’s including the price of the electricity to bake it, even in an oven. You might have to be a bit clever and do some bulk baking and freezing to get the price down a bit per loaf, but with a bag of strong white flour being about 80p in Tesco’s now and you can get yeast for 1p at the bakery counter it might make sense to have a go at a basic loaf, even adding in the price of fuel and maybe some oil and salt it will still come out less than 50p per loaf. Breadmakers are quite stingy on the old electricity so quite an economical way to bake a single loaf – Which? says about 0.34 kWh per go, so about 5p. I don’t mind that the PM can’t bake bread by hand, he should have better things to be doing with his time. Like Boris and the Ride London-Surrey 100, I would have been sad if he had been faster than me because he really does have better things to do with his time than train to cycle fast.

I used to own a breadmaker, but like a lot of gadgets, once the novelty wore off it didn’t get used and then it was thrown out. However, I have hung on to my recipe books. I’ve had some sundried tomatoes hanging round the kitchen for a while and finally decided that today was the day on which they were going to be used up. So here is some basil, tomato and parmesan bread from The Bread Machine book by Marjie Lambert. Which may well be out of print by now. 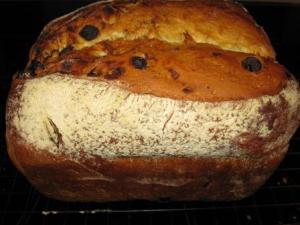 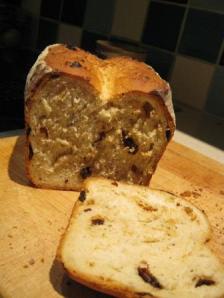