Sometimes I think I think too much about baking. However, I do think that bakers should think a bit about what goes into their bakes and what it contributes to the diet (in the old-fashioned regime sense of the word rather than the current emphasis on weight loss) of the person or people eating it. Sweet stuff is of course a treat and should not be a staple part of any regime, although sometimes I argue that cake is one of the major food groups along with protein, fruit and veg, carbs and fats but it really should only be the thin slice on that food plate the health people would have us use.

Readers of previous ramblings will know that I often cook with older cookbooks that have a bit of a wholefood spin to them. And on balance, that’s pretty much where I like my cakes and breads and stuff to be, full of interesting tastes and textures and hopefully not doing too much damage to anyone. Now I know I’m swimming against the tide here most days because yet again popular new books are all about the ‘look’ and not about the contents and what that contributes to the diet. I will admit to making too many rather worthy chewy efforts in the past, and I try to look for the more inspiring ones these days. However, you probably won’t find cup cakes here unless they have something special about them not just a fancy topping.

So this week I have baked the caramel layer cake from Great British Bake Off’s latest book. I halved the quantities because it is a mighty thing.  You can find the whole recipe on the web here (but please come back if you go there!) and we did manage to eat half of it before I caught it for a photo. 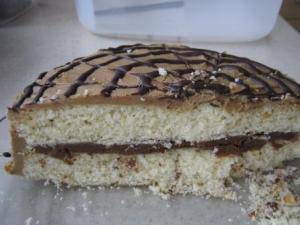 So, that’s all well and good but it is a lot of butter and sugar all in one place and while it does taste lovely it is a lot of ’empty calories’ that I’d rather not eat myself. I thought about having something a bit more nutritious about the house too. A recent census of the kitchen cupboards revealed a pack of dried figs I’d forgotten about so I cast about for a recipe to use them up and found a Dan Lepard cake, cinnamon honey fruit cake which luckily for everyone is available online for free as well as in his book “Short and Sweet“. What a difference in the ingredients – raisins, apricots from Daily Bread, figs, not much butter, honey, brown sugar and treacle! Dan suggests a tray bake so I did that baked it for about 45 mins and it made 16 lovely solid slices of goodness.  That’s a lot for me to eat if the others here don’t like it but I’ve also put some in the freezer for another day.

What ever your favourite is, remember cake is a treat not a staple food group.

Writing this while ‘enjoying’ Terry Leahy on Desert Island Discs, sadly his taste in music so so apt for Tesco, middle of the road and cheap! Must remember to put a link up when it’s available! Listen again.

One thought on “sometimes less is more”